Posted on April 8, 2013 by shinealightproject

Each object in our stores has its own unique reference number, which allows us to access information relating to it using a database system called Modes. In most cases these records are very comprehensive, but in some instances vital information is missing. A key element of the Shine a Light project involves updating the information we hold on each object and inputting it into the database.

Examples include things like object dimensions, a brief description, recording of any inscriptions and conservation issues, including details of work undertaken. We also photograph any objects that do not already have saved images on record.

However the most interesting element is called a ‘Statement of Significance’, with this information we explain and justify why we deem each object important enough to collect and store. It involves answering important questions, such as, how old is the object? Where and with whom is it associated? Is it related to an important event or period of time? What was it used for? And most importantly, what stories is it able to tell?

This is my favourite aspect of my job, objects really comes to life when you begin to learn their history. To place an object in its historical context really maximises its importance, relevance and usefulness.

Last week I had the privilege of investigating an object, which happens to be my favourite thus far! The object in question is a union banner used originally by the Operative Bricklayers Society Norwich Branch. This was a nationwide union representing bricklayers until 1921 when it combined with several other unions to become ‘The Amalgamated Union of Building Trade Workers’. 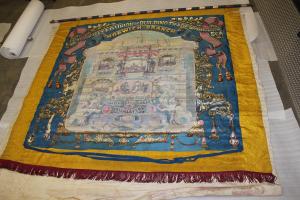 The banner’s creation can be dated to between 1880 and 1900, it bears the name of both unions, with the Amalgamated Union of Building Trade Workers name being added at a later date. It has various inscriptions and slogans such as ‘Union is Strength’, ‘Science, art, truth, prudence, justice, peace and industry’ it also contains bible verses, such as ‘Every house is builded by some men, but he that built all things is god’, which is taken from the book of Hebrews. 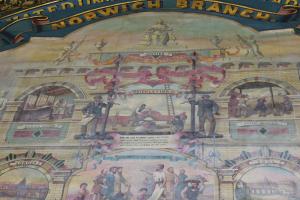 Trade Union banners like this one were used to represent the union during marches and promoted the benefits of membership. This union banner would have been used on many occasions of local importance, but we know it has a link to a very important event of national significance. It was used during the General strike of 1926 in a demonstration at Norwich Castle in support of striking mine workers. At this protest the banner was damaged becoming ripped in high winds.

The general strike was called by the Trade Unions Congress on the 4th May 1926 in response to attempts by coal mine owners to reduce the pay of already impoverished miners whilst simultaneously increasing the length of their working day.

In solidarity 1.7 million workers went out on sympathy strike including transport, dock, printing, building, heavy industry, gas and electric workers. The transport network came to a standstill, printing presses stopped working and the supply of food was severely disrupted. There were fears among the establishment that Britain might be heading towards a socialist revolution. 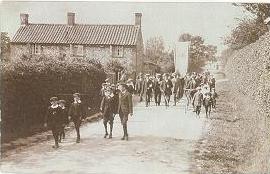 This photograph was taken in the North Norfolk village of Stibbard during the general strike of 1926 and shows marchers with a banner (though not the same one as featured in this blog). Reproduced with permission of Gresenhall Farm & Workhouse GRSRM : CP.CP3879

King George V disagreed with those calling the strikers revolutionary instead stating ‘Try living on their wages before you judge them.’

Ultimately the strike was a failure, the sympathy strikers headed back to work, and though the miners held out until November they were eventually forced back to work through sheer economic need. Upon returning to work they were forced to accept longer days and lower wages.

This strike was pivotal in the forming of the 1926 Trade disputes and trade unions act which prohibited the use of secondary support strikes as well as banning strikes that aimed to coerce the government into a specific action. The Labour party repealed this law in 1945, but it was again added to the statute book by Margaret Thatcher’s first government in 1980.

It is in this fascinating historical context that in May of 1926 the bricklayers and brickmakers of Norwich downed tools and headed to Norwich Castle carrying this banner to demonstrate in solidarity with the striking miners.

Check out this almost identical banner from the Watford branch of the Operative Society of Bricklayers, held in the collection of the People’s History Museum.

More information about the use of political and union banners. 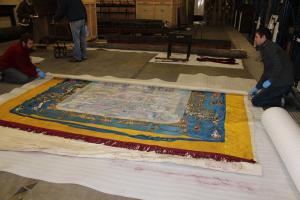 The banner being very carefully unwrapped.