Posted on August 12, 2014 by shinealightproject

On a recent visit to Gressenhall, I was pleased to be allowed by Sophie Towne and Joshua Giles to visit the Norfolk Museums Superstore to examine closely the important large carved chest from St Margaret’s, Norwich which I had glimpsed five years earlier. (NWHCM: L1974.29.3) 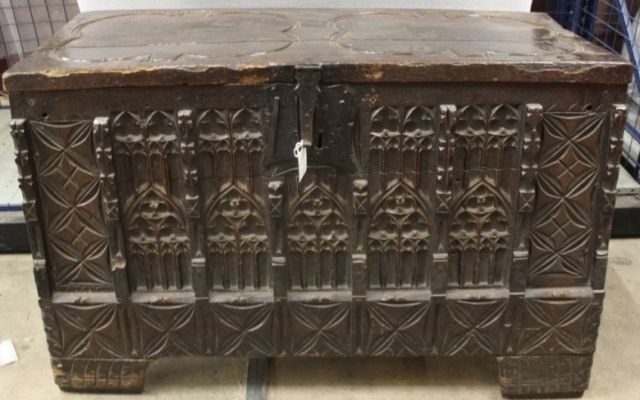 The chest is made of Baltic oak, the highest quality type. In terms of construction it is of the ‘clamp-fronted’ type, i.e. where the front boards tenon into the wide stiles and are pegged. This type was common from 1200-1500 in the UK but continued later in Germany. (Other types at this time were the dug-out chest and the boarded chest held together by pegs or nails and by iron straps). The chest’s distinctive features are its lid decoration (two large, deeply carved, stalked quatrefoils) and its inward-leaning façade made of five bays of deeply-carved gothic tracery with applied buttresses, surrounded by quatrefoils on the stiles and apron and, unusually, with intact feet. A large space in in the carved design is left for the single lock plate (rather than three) whose concave-sides make it decorative and butterfly-like. 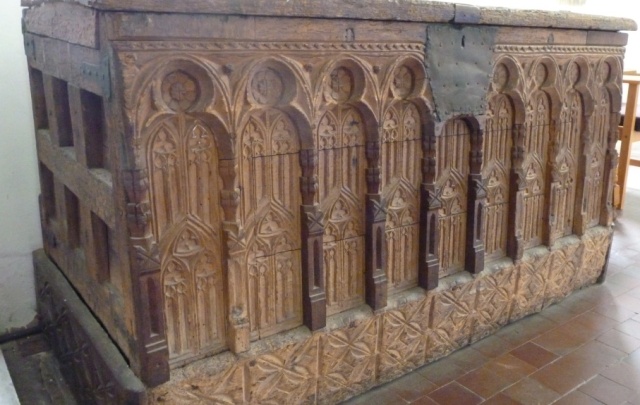 At first sight, the good condition of the chest, apart from a replaced rear left stile, might make the visitor think it was of recent make. In fact, it belongs to an important group of five such chests (the others are at Litcham, Faversham, Rainham and Canterbury). The Faversham chest has been dated dendrochronologically to 1390-1420 and I suspect the Norwich, Litcham and Canterbury chests are slightly later than this, say 1400-1430. Fred Roe, who first wrote on them in Ancient Coffers and Cupboards (1902), baptised the Kent examples ‘Kentish Gothic’ but this was misleading, not only because of the existence of the Norfolk examples. What Roe did not realise is that this group of chests share features with similar chests likely to have been made in Lower Saxony or nearby where chests with identical lid decoration, and inward-leaning facades with very similar deep-carved tracery can be found. Moreover, lid decoration is exceptional on English chests. 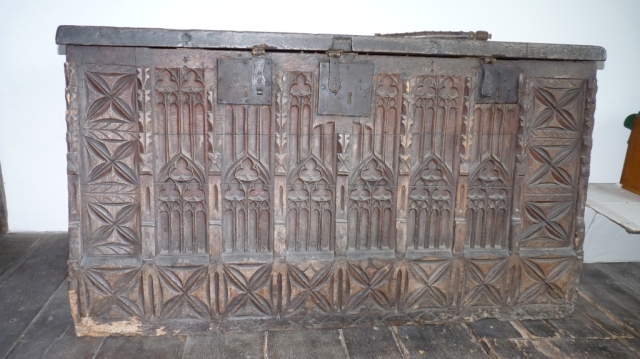 All the evidence is that this chest is either an imported chest or a chest made by an immigrant craftsman in the tradition of Lower Saxony or a nearby region. (The use of Baltic oak does not establish the chest’s origin since it was widely imported.) This interpretation helps to make sense of why similar chests can be found in two different counties both on the eastern side of England with close links to the continent via the Hanseatic trade etc.