Snakes & Ladders: A Matter of Fate and Destiny

Posted on January 9, 2019 by shinealightproject

Happy New Year!! I suspect many of you like myself enjoyed playing a board game with your family during the Christmas period. In my household this year, it was Monopoly, I usually loose and this year was no different. This got me thinking about the vast array of weird and wonderful board games we have in the toy collection at Strangers’ Hall. So I thought I would share a few of my favorites…..

I begin with a different version of an old classic – Snakes & Ladders. 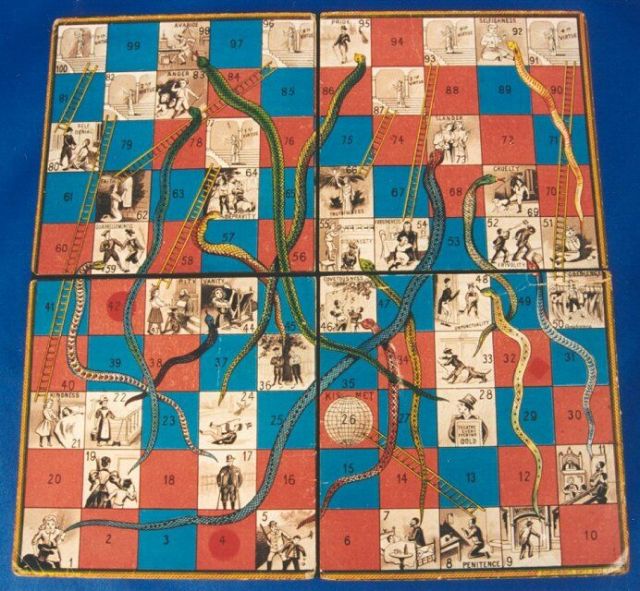 Self denial allows you to jump from square 80 to 100

It follows the same principle as the usual game i.e. snake = bad and ladder = good, but with a twist. Named Kismet, meaning fate or destiny the game was intended to show a child that by being good and obedient, life would be rewarding and generally more pleasant.

Next we have Ships & Commerce or Merchants of the Mediterranean.

The game features a map of the Mediterranean and the countries surrounding it, in the centre is a picture of two sailing ships. It comes with 73 cards each relating to one of the 73 spaces and printed with the name of a product such as wine, marble or tin. As you move around the board (on the roll of a dice) you acquire cards, the winner is the person with the highest value of goods. The intention of the game was educational – to learn which goods or products originated from the different countries and regions.

Finally we have the fantastically named ‘Go-Bang’ game which was produced by the Thomas de la Rue company in the 1870s. It is actually a variation of a Japanese game called Gomoku which roughly translates as five stones. Traditionally the games was played with black and white stones on a grid. The winner was the first person to get five colours in a row, either horizontally or vertically. 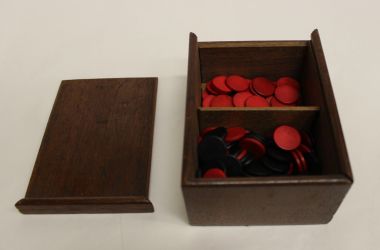 Gomoku was introduced into Britain in the 19th century, but was re-named as ‘Go Bang’ (Connect 4 is also a variation of Gomoku). As you can see from our game the stones have been replaced by red and black counters, but the same principle applies.

There have actually been 7 Gomoku world championships since 1989, the current champion, Zoltan Laszlo of Hungary was crowned in 2017.

Be sure to visit Strangers’ Hall when it opens for the 2019 season on the 20th February.

1 Response to Snakes & Ladders: A Matter of Fate and Destiny