Are you being served?

Posted on August 27, 2013 by shinealightproject

Norwich is a City with many things to offer; over 1500 historic buildings, numerous museums and art galleries, 31 churches, 2 cathedrals and a medieval castle, but that’s not all, Norwich is ranked as one of the top 10 places to shop in the UK*, its streets are busting with an abundance of high street stores, designer shop and quirky boutiques. Like most cities today Norwich is home to four of the large department store chains; John Lewis, Debenhams, M&S and House of Fraser, but there is also a large, local, independent department store, Jarrolds.  In short Norwich is a shopaholicas paradise!

Recently, in the Superstore, we came across a large floral carpet, on the reverse incorporated into the design was the name ‘Chamberlins Sons & Co. Norwich’ This sparked my curiosity as it was a name I was unfamiliar with and after a quick Google search I found that Chamberlins was the name of a department store in Norwich which traded from 1815 to the 1950’s.

Chamberlins was founded by Henry Chamberlin (1777-1848) who came to Norwich from Edinburgh in 1815. A year later he established the large department store in Norwich City centre, located on the corner of Dove Street and Guildhall Hill. His son Robert became a business partner 1823 and the firm became known as Chamberlins, Sons & Company. Under Robert’s direction the shop expanded along Dove Street until it occupied 42,000 square feet. 120 members of staff were employed to work in the store and an apprentership scheme was established to ensure quality customer service and product knowledge. The Norwich Heart website states that female assistants ‘were not allowed to serve customers for the first year, but fetched and carried for their superiors. Later they would be allowed to assist the seniors, and it was only during their third year they were allowed to deal directly with the customers.’

By the end of the 19th Century trade was booming and the store had departments devoted to millinery, furnishings, carpets and clothing. Chamberlins manufactured many of the items they sold and in Botolph Street, Norwich, a factory manufactured their fashion products.  The factory employed another 800 members of staff which was good for the local economy. The garments they produced were of high quality and Norwich Heart’s website has a fine description of a visit to the store taken from an article written at the turn of the century: ‘The dress department is considered by the principals as the chief one, and great attention is bestowed on it. It is a handsome square gallery, the centre of which is occupied by the lantern opening, which lights the department below. It has a glass roof and contains a very considerable counter space, while the walls are literally lined with shelves, containing all the best available fabrics of English or Continental make.’ In fact in the Norfolk Museums costume collection we have a wedding dress made by Chamberlins which was worn by the bride in February 1939. 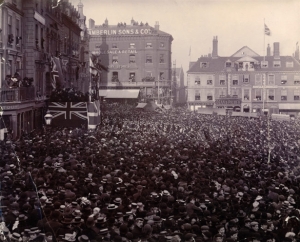 Guildhall Hill, Norwich 1901 when Edward VII was proclaimed King. Chamberlins is visable in the background, notice the people sitting on the roof!

When war commenced in 1941 Chamberlins’ Botolph Street factory began to produce product for the war effort including East Coast oilskin, a water-proof material used in various garments. The demand for products became so high that it was necessary to build and equip a new factory in order to fulfill the need of the Admiralty and War Office. In addition to this Chamberlins were also requested by the Government to manufacture large quantities of standard clothing and suits for discharged soldiers. The war work of Chamberlins totalled close on one million garments and they received recognition for their contribution towards the war effort.

The store continued to trade during the 30’s and 40’s but unfortunately during the 1950’s the store was purchased by the larger department store chain Marshall & Snelgrove (later to be purchased by Debenhams!). The building however is still standing and the site is currently occupied by a Tesco Express. 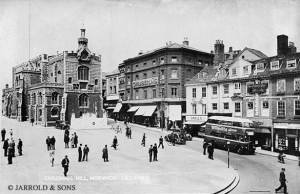 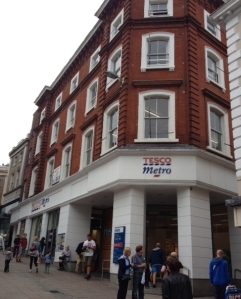 The building that Chamberlins department store once occupied

Located near the ex-Chamerlins premises is local, independent department store Jarrolds. The roots of the Jarrolds store can be traced back to 1770 when John Jarrold opened a grocers and drapers in the Market Place at Woodbridge in Suffolk. By the time John died in 1775 the business was doing very well and was continued by a family friend until 1794 when John’s son, John Jarrold II was old enough to take charge. John Jarrold II diversified the company moving from retail to farming and then printing. In 1823 John moved business to Norwich, setting up shop at 3 Cockey Lane (as London Street was then called) as a bookseller, publisher and printer. In 1840 the shop moved across the road into part of their present site. Since then over a period of 164 years they have gradually acquired the rest of the site. The business continued to grow and in 1878 Jarrolds published Anna Sewell’s classic children’s book Black Beauty. By the 1900’s Jarrolds was still a family firm with the third generations of the Jarrolds family in charge. The business had expanded with new shops opening in Great Yarmouth, Cromer, Sherringham and Lowestoft, selling stationery, books as well as continuing operation as a printers and book binders. Their success continued and in 1911 Jarrolds was granted a Royal Warrant for stationery for H.M. King George V. 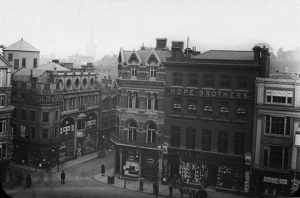 The retail division of Jarrolds came to the fore in 1964 when the Norwich branch extended after the purchase the adjacent Corn Hall on the Exchange Street and Bedford Street. The revamped store opened in 1965 with larger book and household departments and the addition of ladies clothing. Throughout the 70’s and 80’s Jarrolds continued to expand opening more stores and diversifying their product range. In 1995 the company celebrated their 225th anniversary, a commemorative plate was designed for the anniversary. Finally, the last major change came in 2004 the company bought the last part of the “block”, by purchasing 9 -11 London Street which they renovated and linked to the main store. This is now their shoe department. Jarrolds remains privately owned and family members continue to be closely involved in the management of the business. The Norwich branch continues to be a favourite with shoppers and their fantastic Christmas window displays are widely renowned. Jarrolds has a vast and interesting history if you would like more information see http://www.jarrold.co.uk/about-jarrold/history or visit the John Jarrold Printing Museum, Whitefriars, Norwich, Norfolk. 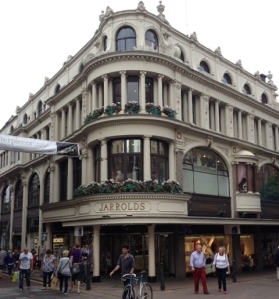 A blog about Norwich shops wouldn’t be complete without mentioning John Lewis or as it is affectionately known locally, Bonds. The Norwich department store has been part of the John Lewis Partnership since 1982, even though the shop didn’t adopt the name John Lewis until 2001. Bonds was another of Norwich’s department stores founded around 1879 when Robert Herne Bond purchased a small drapery shop at number 19 Ber Street, Norwich. With help from his son, Robert expanded their premises and by 1886 Robert had purchase three adjoining properties, including the Jubilee public house. In 1914 the Arcade on All Saints Green was opened, giving the business a presence on two wide streets, the shop remained busy and during the 1930’s more than 30 assistants were employed in the millinery department and behind the scenes more than 20 milliners were employed to make the hats they stocked. On a Saturday, the busiest day of the week more than 1,000 hats could be sold! Bonds were ever expanding and further growth came when the lease of the Thatched Cinema expired in April, 1930 and the property was taken over by Bonds for use as Restaurant, Conference Hall and Ballroom. Unfortunately, the ballroom was later destroyed during the war. The store itself was also in ruins after an air raid strike in 1942 but that didn’t stop the Bonds family from trading, after three days they were selling goods from their stock vans parked on the bomb damaged car park and the restaurant continued to operate from a tin shed! 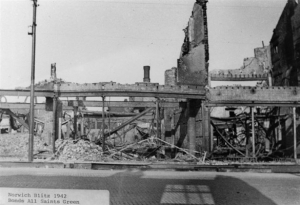 After a great re-build the area that Bonds had occupied had completely changed, the department store to had modernized placing an emphasis on quality goods and personal service, similar to the John Lewis we know today. Bonds had always had a fantastic training programme for staff to ensure good customer service, trainees spent the first year of their training disentangling string, smoothing out tissue paper, picking up pins, and brushing and dusting the vast departmental displays!

In 1979 Bonds celebrated its centenary but it was only a short time after that the store was purchased by the John Lewis chain. Shortly after the John Lewis Partnership took over they had made considerable changes to the store the most notable being the building of a multistory car park which increased the capacity from 100 to 700 cars!

One of our favorite objects in the superstore is a Bonds bicycle. Judging from the size if its basket it appears to have been used for deliveries but this has not yet been confirmed.

Norwich’s shops continue to change and in 1993 the Castle Mall, (or Norwich Mall) designed by local practice Lambert, Scott & Innes, was opened. Following shortly behind was Intu Chapelfield another large shopping centre which stands on the site once occupied by the Caleys chocolate factory. Chapelfield was opened in September 2005 and host a number of shops, cafes and restaurants.

In my opinion Norwich is a fantastic place to shop and well worth a visit if you are in the area. See http://www.visitnorwich.co.uk/default.aspx for more information about visiting Norwich – A Fine City.

8 Responses to Are you being served?